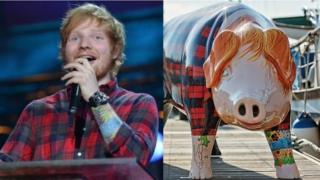 BBC/Suffolk County Council
Ginger hair, checked shirt, and colourful arm tattoos... it could only be Ed!

Forget all his prizes and award-winning albums, this might be Ed Sheeran's greatest honour yet - a pig statue, made to look just like him.

The statue, called 'Ed Sheer-Ham' (get it?!) took pride of place among 39 other pig sculptures, as part of a big piggy display, all around Ipswich.

It was sold along with the others, for charity, and went for an impressive £6,200!

But most importantly of all, the statue won approval from Ed himself.

He said the design was "awesome".

But Ed's statue wasn't the only one hogging the limelight - can you guess who these other designs are? 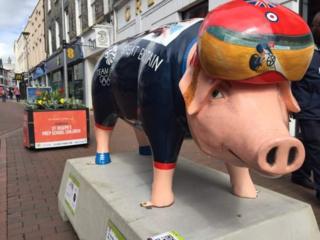 A cycle helmet, sideburns, and Team GB kit.... it has to be Sir Bradley Wiggins! Or should that be 'Piggins'? 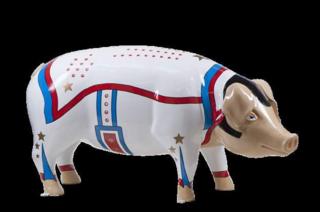 Pigs Gone Wild
The King of Rock and Roll as you've never seen him before.... say hello to Elvis Presley! 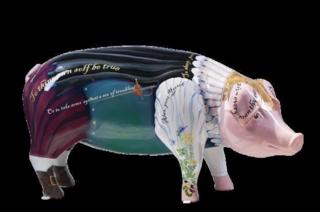 Pigs Gone Wild
Is it the greatest playwright of all time?! No, it's just a tribute. This fine-looking hog is dedicated to William Shakespeare.