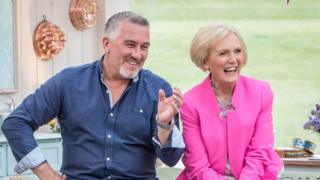 The Great British Bake Off judge Mary Berry has announced she is leaving the TV show, but fellow judge Paul Hollywood is staying.

The popular baking contest is moving to Channel 4 after the current series finishes.

Mary said: "What a privilege and honour it has been to be part of seven years of magic in a tent."

Her co-star Paul Hollywood has signed a deal to do three series of the show on Channel 4.

The presenters Mel Giedroyc and Sue Perkins are also quitting the programme.

Mary added: "My decision to stay with the BBC is out of loyalty to them, as they have nurtured me, and the show."