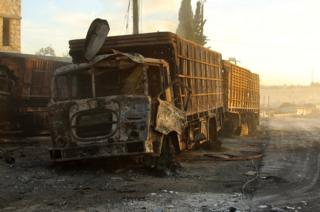 Reuters
Eighteen lorries were destroyed in the attack

The United Nations has stopped all of its aid to Syria, after its lorries were attacked by warplanes near the city of Aleppo, on Monday.

There has been a civil war in Syria, in the Middle East, for more than five years.

Although many people have left the country as refugees, millions of people are still trapped.

The United Nations is a group of 193 countries, including the UK, who work together to try to keep peace in the world.

It was working in Syria to try to help people caught up in the conflict.

The convoy, a group of lorries travelling with supplies, was attacked even though it had got permission to travel, from all sides in the conflict.

Eighteen of the 31 lorries were destroyed, and about 20 people were killed in the attack.

The attacks break important rules called International Law, because people not involved in the fighting were killed. And by destroying the aid convoy, they are stopping people from getting what they need to survive.

Because of the attack, the UN say they are stopping all aid efforts in Syria, while they try to work out how to keep their workers safe.

The lorries that were attacked were carrying things like blankets, winter clothes, food, and medical supplies which are badly needed by people trapped in sieges in Aleppo and other areas.

They were supposed to be delivered to about 78,000 people who haven't had new supplies since July.

There are now big concerns for the people who are still stuck in the country, as they may not get the food and medicine they need to survive.