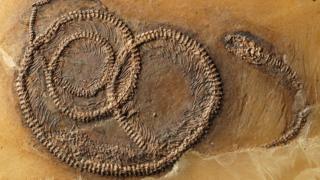 Take a look at this incredible fossil which shows a bug inside a lizard inside a snake!

This amazing discovery was found in the 'Messel pit' in Germany - which used to be an ancient volcanic lake, where scientists have found some incredibly well preserved fossils from around 57 - 36 million years ago.

The fossil is a really well-preserved example of the food chain in action.

It shows that a bug was eaten by a lizard, who then shortly afterwards, became lunch for a giant snake! 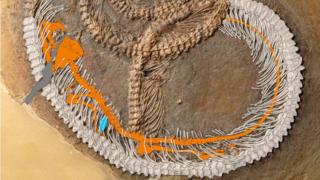 Krister Smith
This picture shows the lizard and bug inside the snake.

Scientists think the snake must then have died soon after, and was preserved in the Messel pit for millions of years.

This fossil is incredibly rare, and scientists have only ever found one other fossil like it.

Krister Smith, who is the lead researcher on the project said that: "It's probably the kind of fossil that I will go the rest of my professional life without ever encountering again."

The fossil is really useful to scientists who can learn more about how ancient animals lived and what they ate.

Rare fossil that looked like a balloon has been discovered