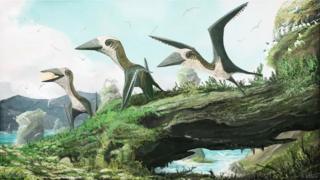 Scientists have discovered evidence of a rare species of flying dinosaur, which was as small as a cat.

Fossilised bones of the dinosaur were found by researchers on Hornby Island in Canada. They are thought to be 77 million years old.

It's fossil shows that it was a type of pterosaur - a group of fearsome, flying dinosaurs, with long sharp beaks and teeth used for crushing shellfish.

However, the unusual thing about this pterosaur was that it was tiny! 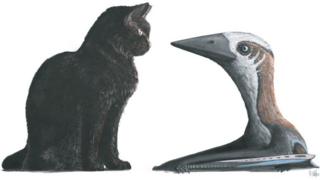 Mark Witton
The tiny pterosaur next to a cat.

Scientists thought the smaller pterosaurs had all become extinct around that time.

However, this new discovery shows that the small pterosaurs hadn't quite been pushed out just yet!

Finding pterosaur fossils is no easy task - because their bones are hollow and thin to help them fly, this means that they don't preserve very well over millions of years, so finding these fossils was really rare.