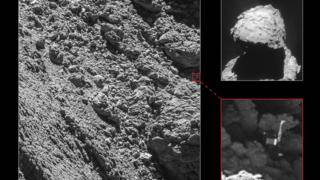 The Philae lander has been found!

The European Space Agency has released a photo of the lost Philae probe, which successfully landed on a moving comet in 2014 as part of the Rosetta mission.

Scientists lost contact with it earlier this year, so the team are very happy to be able to see that it is still there.

This was because the probe had a pretty bumpy landing.

It bounced on impact with the comet, and ended up being stuck in a shaded part of the comet.

This meant that its solar powered batteries couldn't charge from the sun properly. 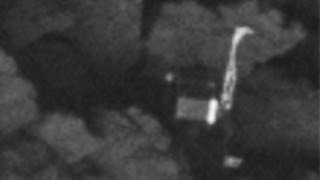 The Philae lander was found using the super-powered OSIRIS camera, which snapped the photo on its orbit around the comet.

The Rosetta space mission comes to an end in a month's time, so the scientists are very happy they were able to find it before the end of the mission.

"This remarkable discovery comes at the end of a long, painstaking search," says Patrick Martin, one of the ESA's scientists. "We were beginning to think that Philae would remain lost forever. It is incredible we have captured this at the final hour."

Rosetta comet probe: How Philae vehicle will land on comet