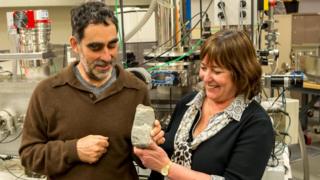 Scientists think they have found fossils of some of the oldest living things on Earth!

The fossils were discovered by scientist Allen Nutman in a large chunk of ancient rock from Greenland.

Researchers from Australia and the UK studied the rock and found that there were tiny microbe structures called Stromatolites, which look a bit like cauliflowers.

This means that tiny microbe creatures could have been living 3.7 billion years ago!

Currently, the oldest known life on Earth is a set of stromatolites from Australia, which are about 220 million years younger than this new discovery. 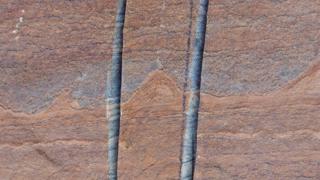 Allen Nutman
This close-up picture shows one of the stromatolite layers in the rock.

However, other scientists aren't too sure about the discovery, as the rocks the fossils were found in have been squeezed and heated over billions of years, meaning that the fossils are much harder to identify.

Roger Buick, a scientists at the University of Washington in Seattle said that he had a few questions and: "problems that need addressing before I'll believe it".

All living things on Earth are made from the material carbon, and scientists think that by studying the carbon in the rocks, it will help them to have a better understanding of whether or not the discovery is accurate.

One of the researchers thinks this discovery could help scientists looking for signs of life in rock samples from the Nasa Mars mission in 2020.