Nico Rosberg cruises to victory at the F1 Italian GP 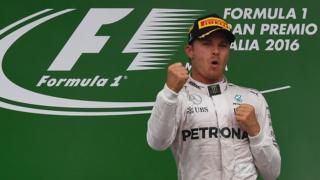 The German cruised to the win after passing his team mate on the start line, with Hamilton dropping from pole position to sixth before the first corner.

Hamilton fought back to take second place but was too far behind Rosberg to challenge for the win.

The victory cuts Lewis' lead in the World Championship to just two points.