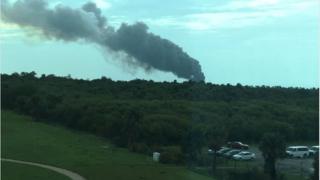 Frank Jakubetz
Smoke rising from the Kennedy Space Center after the explosion.

A rocket has exploded at the launch pad at the Kennedy Space Center in Florida.

The company say no-one has been hurt but we don't know why the blast happened.

Smoke is still coming from the site and the blast shook buildings several miles away.

Nasa say Space X were planning to use the rocket to take a satellite into space but the satellite and the rocket have both been destroyed.