What was the Great Fire of London?

The 2 September 2016 marks 350 years since the start of the Great Fire of London, which changed the skyline of the capital city forever.

In 1666, fires in London were quite common. Homes didn't have electricity, so real flames were used for lighting, cooking, and heating homes.

Also buildings were made out of using wooden timbers and were built closely together, so once they'd started it was pretty easy for fires to spread.

No fire had ever grown as big as the Great Fire of London before.

The summer of 1666 had been particularly dry, with drought making it more likely that fires would spread.

How did the fire start? 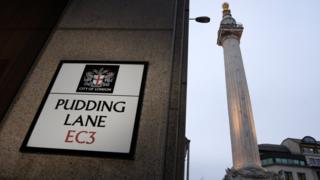 It's thought that the fire started in a baker's shop early in the morning.

The shop belonged to the king's baker, Thomas Farynor, in Pudding Lane.

With strong winds, the fire spread quickly down Pudding Lane, towards the River Thames and London Bridge.

As the fire reached the River Thames, it passed over warehouses full of flammable materials like oil, which quickly set on fire. After just a few hours, London Bridge was on fire too.

The fire was stopped from reaching the south side of the river because a section of the bridge was missing.

How many buildings did the fire destroy?

Famous buildings including St Paul's Cathedral, The Royal Exchange, and the Guildhall were completely destroyed, as well as 13,200 houses, and 87 parish churches.

How did they stop the fire? 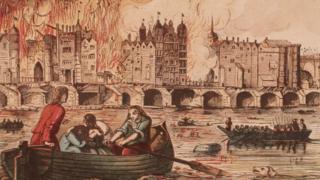 Firefighting was much more basic in 1666, and people didn't know nearly as much about stopping fires as we do today.

Instead, a plan was suggested to blow up houses in the path of the fire, so that there would be an area with no houses to act as fuel for the fire to keep growing.

The Navy used gunpowder to destroy the buildings and by the next morning, the fire had been stopped.

How many people were affected?

Up to a third of the city was destroyed and more than 70 thousand people were made homeless.

Six people were recorded to have lost their lives as a result of the fire but it's thought many more could have died.

The Great Fire of London: How it happened