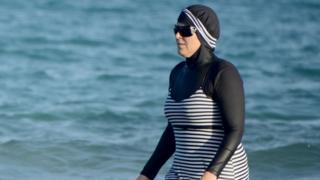 France's top court has said that the rule stopping women from wearing burkini swimsuits on some beaches must be suspended.

That means the ban has been temporarily stopped, so women can wear the burkini for now, until a final decision is made later on.

Burkinis are a type of swimming costume worn by some Muslim women, which covers their arms, legs and hair.

Some towns in France had banned women from wearing them, meaning they would have to pay a fine if they wore them on public beaches or in the sea.

They were banned because they are seen as a religious symbol, which some people think goes against the values and laws of France.

But other people say it's not right to tell women what clothes they can and can't wear, and it should be their choice.

What is a burkini and why are people talking about it?