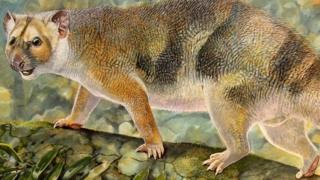 A team from a university in Australia say they have identified a new tiny species of lion called the 'micro lion' that lived 18 million years ago.

The ancient creature was only the size of a squirrel and weighed about as much as a bag of sugar.

The 'micro lion' was a marsupial - that means it carried its young around in its pouch, like a kangaroo.

It would have lived in trees, just like some marsupials like koalas that are still around today.

It might have been cute but researchers say that it had sharp teeth, like knives, which could rip up smaller animals to eat.

This is the ninth marsupial lion that's been found, and it's the smallest so far.

The first part is Latin for 'micro lion' (meaning tiny lion) and the second part is in honour of the famous naturalist and TV presenter, Sir David Attenborough.

Koala hitches a ride in a canoe!

How this poo-sniffing dog is helping protect koalas