Who left the Great British Bake Off? 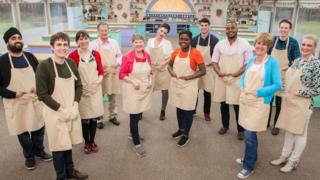 If you haven't watched Wednesday night's Great British Bake Off - look away now...

Lee was the first baker of the series to be given the boot.

He struggled in the technical challenge to make a plate of Jaffa cakes, and his orange and lemon drizzle cake was described as "awful".

He wasn't the only baker to have trouble in the first episode. Several bakers threw their mirror glaze show stoppers away and started again.

But there was good news for Jane, who was voted the first star baker of the series.

GBBO's Nadiya: Winning one of best moments of my life

Gingerbread landmarks of the UK