Send us your questions for Laura Trott and Jason Kenny 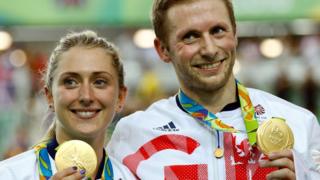 All hail the king and queen of the velodrome!

Laura Trott and Jason Kenny have TEN Olympic gold medals between them after a hugely successful Games in Rio.

Laura became Great Britain's most successful female Olympian when she picked up her fourth gold medal.

Meanwhile her partner Jason Kenny won his sixth gold, to equal Sir Chris Hoy's record for a British athlete at the Olympics.

They're back from Rio and Newsround's having a chat with them - but what should we ask? Let us know your questions!

Thanks for your questions - this page is now closed. Check back later to see our interview with Laura and Jason!