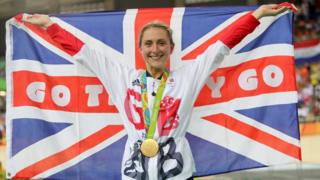 The Olympic Games finished in style last night with a huge closing ceremony in Rio.

It's been an amazing Games for Team GB, who finished second in the medal table after the US.

It might be hard to chose, but we wanted to know your best moment from the Rio Olympics.

Was it the moment Laura Trott won her fourth gold medal in cycling to become Great Britain's most successful female Olympian?

Or Usain Bolt's incredible treble treble, winning nine gold medals, three in each of the Olympics he has competed in?

Or how about when Max Whitlock won two gold medals in his individual gymnastic events?

Thank you for your comments this chat page is now closed.

My family is South African so I enjoyed watching Wayde van Niekerk winning gold in the 400 meters running. I also liked watching the women's hockey team, they were very impressive.

My favourite moment was when GB got the equalizer in the women's hockey gold medal match. It was so amazing to watch that - and then they scored the last penalty and that moment was my second favourite.

I was very inspired by Adam Peaty's gold medal.

Laura Trott: It feels weird to have four golds