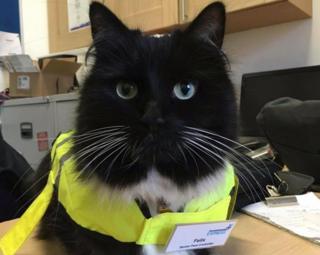 A railway station cat is doing a fun run to help raise money for a children's charity.

Felix, Huddersfield train station's cat, started her 5k run on Friday morning although station staff say she has been taking breaks by "lying down in the corridor".

The distance Felix covers is being monitored by a satellite tracker in her collar.

The furry fun runner has already raised more than £2,500 for charity. 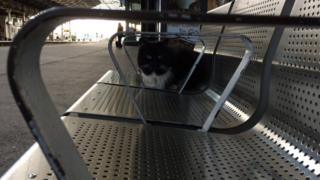 But it looks like it could be slow going. Felix keeps "paws-ing" for long breaks.

Andrew McClements, from TransPennine Express, said: "The challenge has got under way, she's doing well but I'd be surprised if she covers 5k by Christmas because she's being lying down in the corridor."

Plenty of people have been inspired by her "tail" and have got in touch on social media.

Felix fan Shirley wrote: "Good luck... I don't care if you're not able to manage it, just look at how much you have raised simply by being so pawsome, that's a big enough achievement for one fabulous kitty."

Emilie sent well wishes from her and her cat Jack Sparrow in Rio de Janeiro.

Barbara Blackie posted: "Best of luck for your Pawlympic challenge Fifi - we're all rooting for you."

What's so paw-some about cat cafes?

12-year-old US girl runs half marathon by mistake