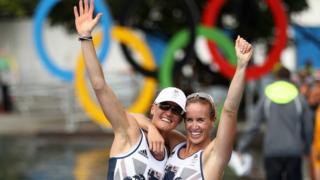 Great Britain rowers Helen Glover and Heather Stanning have defended their Olympic gold by winning the women's pair at Rio 2016.

The led from the start and finished 1.2 seconds clear of New Zealand with a time of 7:18.29 seconds.

"The pressure was immense," said Glover.

"London was a home games and there was nothing more special but this is defending a title - it means so much."