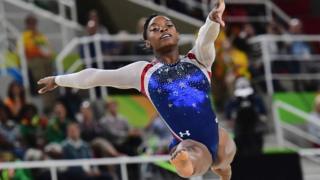 USA's Simone Biles has gone from star to superstar at the Rio Olympics, with four gold medals.

But just who is the most-searched for gymnast in the world? Read our guide and find out.

Simone was born on 14 March 1997 in the US state of Ohio and has three siblings: Ronald, Adam and Adria.

In the first few years of her life, her mum was unable to care for Simone and her siblings, and so she was adopted when she was five, by her grandparents, Ronald and Nellie.

She grew up in Texas and says her favourite subject at school was history. 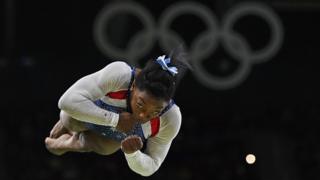 Simone had her first go at gymnastics during a trip when she was six. The gymnastics club sent a letter home with her, requesting that she joined tumbling or gymnastics.

She was home schooled in her secondary education to allow her to train.

Her favourite gymnastics event is floor.

Her hobbies include shopping and hanging out with friends and her favourite food is Italian.

How good is she? 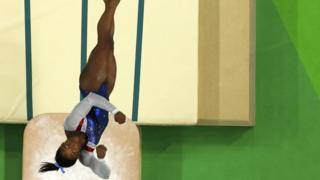 Simone is four feet and eight inches tall - but manages to leap higher than any of her competitors.

Her coach says Simone can learn a new skill in three days, whereas other gymnasts can take months or even years to master a new move.

Her powerful run allows her to include more elements in her routine than others, who have to run further before they can start tumbling.

At 19 years old, she has the most World Championships gold medals of any female gymnast in the world.

Simone even invented her own move for her floor routines, which is now named after her. 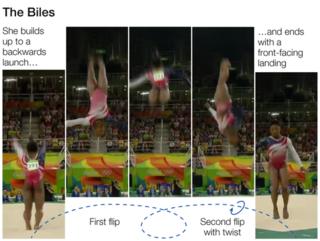 She has come up with her own floor move - the Biles

It is a double backward somersault, followed by a half-twist and a blind landing. At the highest peak of the move, she leaps nearly twice her height.

Until she first performed 'The Biles' in 2013, it had never been tried in competition before.

Just how famous is she?

A video of Simone winking and smiling at a former Olympic gymnast during a routine was watched 11 million times in the first few days of it being posted online.

She's the most searched for gymnast on Google.

After she won her all-around gold medal in Rio, she was trending on Twitter straightaway, with two-and-a-half times more tweets than anything, or anyone.

She even has her own emojis called... you guessed it... Simoji. 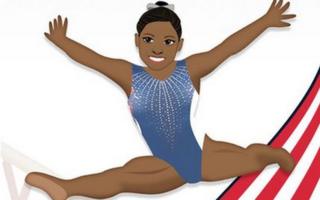 Not specified
Simone emoji anyone?

Various companies sponsor her and want to be associated with her, including: Nike, Kellogg's and United Airlines.

It's estimated she earns $2 million dollars a year (£1.5 million pounds) but she could earn more after her success at the Rio Olympics.