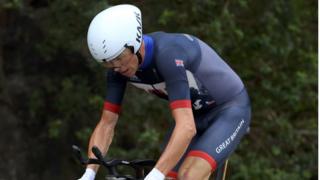 Team GB cyclist has won the bronze medal in the time trial in Rio.

He won the Tour de France this year and was hoping to top it off with an Olympic gold - just like Sir Bradley Wiggins did in 2012.

It's the same position Froome finished in four years ago at the London Olympics.

Swiss rider Fabian Cancellara got the gold medal adding to the one he won in Beijing in 2008.