Comments: Which Olympic sport would you do? 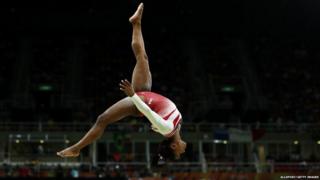 With the Rio Olympics in full swing, there's been a lot of talk around the Newsround office about which sport we would do if we were competing.

Ayshah says: "I'd do gymnastics. I can't stop watching it. They're so incredible. Simone Biles is something else. But I wouldn't be any good, I think I last did a cartwheel when I was 10!"

Jenny says: "The heptathlon for sure. There are seven different events, so surely I'd be passable at one of them?! Jessica Ennis-Hill is my hero."

And Martin says: "Boxing because my family all like it and my idol is Muhammad Ali, who won an Olympic medal over 50 years ago. I always thought if he competed at a games, then it must be awesome."

You told us what sport you would do and why.

I would like to run in either the 100 or 200m races. This is because I like to run and when I grow up I want to inspire children.

I would be a diver because I feel good in the water.

I would like to do gymnastics and kayak slalom. I have been doing gymnastics in a club for 2 years already and I practice lots at home. I love watching the Olympics.

I would do running because I'm the fastest in my family and I might be able to do the Olympics in Tokyo because I'll be thirteen when it happens.

When I am older I would like to be a professional footballer and I would play for team GB.

I would like to do shooting in the Olympics. I entered my first ever competition at the weekend and I came 3rd.

I want to compete in rhythmic gymnastics or synchronised swimming because they are both really graceful and beautiful sports. My sporting idols are the Downie sisters.

I would do equestrian as my idol is Pippa Funnell and I take weekly riding lessons and the horses are so beautiful!

I would like to do swimming or gymnastics because I'm good at them.

I would be a swimmer because I would get a medal.

I would do swimming at the Olympics because I train swimming at school and have won many medals. I might also do cycling because I love cycling every morning.

I would compete in dressage on a horse because horse riding is one of my strong passions!

I would do swimming and archery as on my first time I hit bullseye.

I would be an Olympic runner because I am really fast and I can do 2km in 8:05 minutes and Usain Bolt is my hero.

I would like to be a swimmer because Adam Peaty has inspired me. As well as enjoying swimming I would also like to cycle as I enjoy that too.

I would like to do eventing because I love riding my pony and it's very thrilling.

I would either do trampolining as I am national grade at it, or swimming as my [school] house came first in a school swimming gala. For swimming I also come in the top three places in races.

I would do 1,500m because I have been doing it since I was four. My hero is Jessica Ennis-Hill.

I would choose the swimming because I think I would get the gold.

I would do tennis because it is my main sport and I have won so many tournaments.

Thank you for all your comments. The chat page is now closed.