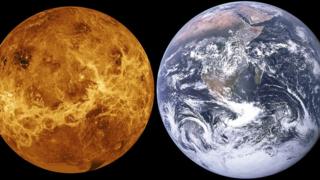 A team of scientists think that Venus could once have been very similar to a young planet Earth.

Using computer simulations, they tried to turn back the galactic clock to see how Venus's climate has changed.

They made different versions of Venus, each with slightly different details, such as the amount of of the Sun's energy the planet received.

By looking at how these versions developed over time, the team began to see lots of similarities with earth.

One of the Venus simulations had pleasant Earth-like temperatures and even had some snowfall. 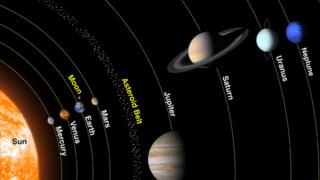 NASA
Venus is much closer to the Sun than Earth, could it once have held life?

These tests help paint a picture of what Venus could have been like one or two billion years ago, when the Earth was only a young planet.

The team from The NASA Goddard Institute for Space Studies, headed by Michael Way, say more missions to Venus are needed to prove whether their simulation are right or not.

Today however, Venus is not exactly a habitable planet. 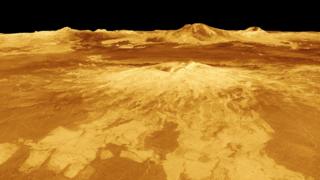 NASA
Today the surface of Venus is far from inviting

Temperatures there are hot enough to melt metal. Clouds of sulphuric acid cover the surface and the pressure on the ground is similar to being more than half a mile under the sea!

So, probably not a good idea to start planning on moving there anytime soon.

Where in space should we explore?