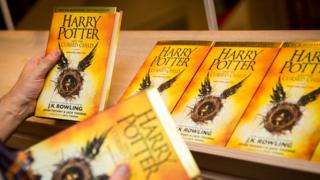 Getty Images
The script was released at midnight on Saturday

The Harry Potter and the Cursed Child script has become the UK's fastest-selling book in 10 years.

It has sold more than 680,000 copies in its first three days alone.

At its current rate, it is on track to become the second biggest single-week sales for a book since records began.

That title is currently held by Harry Potter and the Deathly Hallows, according to The Bookseller, which sold 1.8 million copies in its launch week in July 2007.

Reviewers have complained the script book is an "incomplete experience" as the story "demands to be seen", but theatre critics awarded the play five-star reviews.

The stage production in London's West End is currently sold out, but a new batch of 250,000 tickets is being released on Thursday.

Written by Jack Thorne and approved by Potter author JK Rowling, the production focuses on Harry and Draco Malfoy's sons - Albus and Scorpius.

Harry Potter and the Cursed Child play opens in London