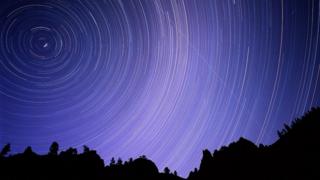 Stargazers of the UK unite! It's time for the annual Perseid Meteor Shower. Woo hoo.

The shower takes place over a period of a few days, peaking across one or two nights.

These peak nights usually fall in mid-August, with the best night for viewing the 2021 Perseids falling on 12 and 13 August.

However, the Royal Maritime Museum in Greenwich say the shower may be visible between 16 July and 23 Aug.

Meteor experts believe this year's shower will be particularly bright and clear.

You'll have to ask your parents if you can stay up late though because prime viewing will be in the middle of the night!

Or, you may be able to get up early because you should be able to see it very early in the morning.

Find out more about the shower below.

Could this robot build homes on Mars?

Why did this photo make history 60 years ago?

What does Area 51 have to do with aliens?

What is the Perseid Meteor Shower?

The Perseid Meteor Shower starts in late July. It is made up of hundreds of meteors streaking across the sky in a beautiful natural firework show, which is visible around the world.

The meteors hit the Earth's atmosphere at a whopping speed of 134,000 mph, but don't pose any danger to us on Earth.

The Perseids - pronounced 'Per-see-ids' - are actually tiny pieces of the Swift-Tuttle comet that can be seen every year when the Earth passes through a cloud of the comet's debris.

The pieces of ice and dust which make up the shower can be as small as a grain of sand or as big as a pea.

They were left behind when Swift-Tuttle passed close to Earth - the last time being in 1992. 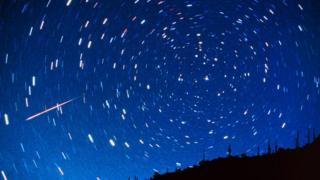 Science Photo Library
Why is it called the Perseid Meteor Shower?

Meteors that form part of the same shower have similar orbits and appear to come from the same place in the sky. This place is called the 'radiant'.

They are named based on the location of their radiant.

For the Perseids, the radiant is within the constellation Perseus - and so that's where it gets its name 'Perseid' from.

How can I see the Perseid meteor shower?

The great thing about the Perseids is that unlike some other cosmic events, you don't need any special technology to watch them.

The Nasa website says: "Note that telescopes or binoculars are not recommended!"

It's best to find a wide open space away from tall buildings or trees, and with as little light as possible. This is why the full Moon this year is going to be problematic.

The more of the sky you can see, the better.

Meteors can generally be seen all over the sky so don't worry about looking in any particular direction.

It's important to let your eyes adjust to the dark too, which can take up to 30 minutes. Make sure you're not playing on your phone while you're out, as the bright light from your screen could affect how your night vision has adjusted to the dark.

Are you going to watch the Meteor Shower? Let us know in the comments below if you do!