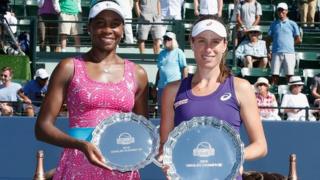 British number one Johanna Konta has risen one place in the women's rankings to a career-high 13th before Rio 2016.

British number three Naomi Broady climbed three spots to 81st, while there was no change for 67th-placed Heather Watson.

Jo Durie is the last British woman to be ranked in the top 10, reaching a career-high fifth in 1984.

Konta, Watson and Murray are among those in the Great Britain squad for the Olympics, which start in Brazil on Friday.