Massive 14-hour delays on the roads in Dover 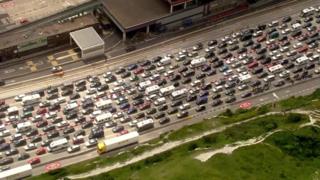 People have been stuck in their cars for around 14 hours.

People travelling to Dover by car have been caught up in massive 14-hour-long traffic jams.

Police have said that the huge queues have been caused by the large number of people making the journey, as well as delays caused by extra security checks at the French border.

Lots of people travel to the port town every year to catch a ferry to go on holiday.

The huge queues began on Friday, and have caused all kinds of problems for the people travelling. 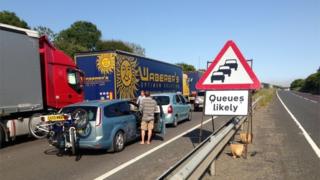 PA
Police think the queues could carry on until Monday

Many people have missed their ferry, and have had to eat and sleep in their cars while they wait.

Police have even been flying in bottles of water by helicopter for people who are stranded. 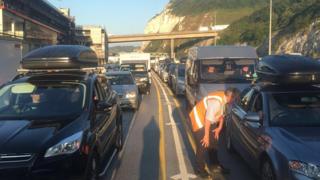 The UK government have announced that UK Border Force staff will help the French border police with their checks at Dover to try to help clear the queues faster.

Police in Kent have warned other people who are thinking of travelling to Dover to bring food and water with them, and that the delays might continue through to Monday.

Is this the biggest traffic jam you've ever seen?