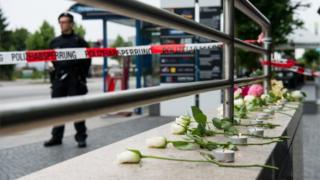 Getty Images
People have been leaving tributes to those who lost their lives in the attack.

A shooting has taken place in a shopping centre in Munich, in Germany.

At least nine people have died in the attack, and it's thought that at least sixteen people have been injured.

The person behind the attack is thought to have been acting on his own, and is now dead.

More than 2000 police officers helped to bring the situation under control.

German police have said: "the motive or explanation for this crime is completely unclear" - meaning they don't know why the man decided to attack people yet.

But they have now said that he was not linked to the terrorist group called IS.

If anything in the news upsets you, then check out our guide here.