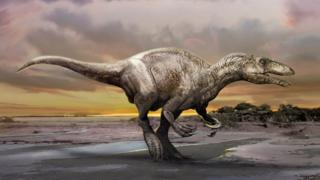 Reuters
An artist's impression of what the dinosaur would have looked like.

A terrifying new dinosaur has been discovered which is part of the 'Megaraptor' family.

The massive Murusraptor barrosaensis had huge claws and light air-filled bones like birds have, meaning it would could run very fast!

Researchers think it would have grown to be more than eight metres long, and lived around 84 million years ago. 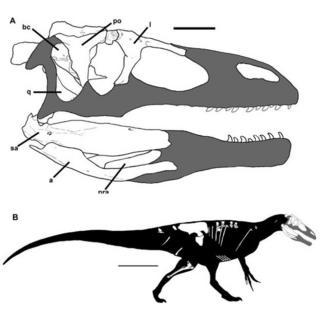 Rodolfo A. Coria and Philip J. Currie
A picture of the bones the researchers found

The dinosaur fossil was first discovered in 2000 in Argentina, in south America.

But it has taken palaeontologist Phil Currie and his team of researchers more than ten years to find out more about it.

He says the dinosaur is a "super-cool specimen" and is one of the most complete fossils of a 'megaraptor' ever found.

Very little is known about the 'Megaraptors' so the researchers are all very excited about this find.