Olympic Jousting? Ancient sport fans call for it at Games 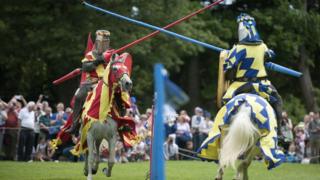 PA
Jousting: like using a lightsaber while riding a horse

The ancient sport of jousting should be in the Olympics, says the historical charity English Heritage.

This year golf and rugby sevens are the new sports at Rio 2016. But jousting fans want more events with men and women wearing armour, carrying lances and charging at each other on horses at 30mph.

Historically, jousting was training for battles, but knights would also challenge each other at tournaments - King Henry VIII was a famous fan.

An online petition has been launched, asking for support from the public.

Rio 2016 - Should skipping be an Olympic sport?