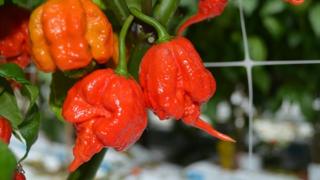 A UK supermarket is starting to sell the world's spiciest chilli pepper. So what makes it such hot property?

The Carolina Reaper comes from the Capsicum chinense species of chilli pepper and gets in the Guinness Book of Records at 1.5 million Scovilles - the measurement scale of how spicy a chilli gets.

The scale is named after its creator, American pharmacist Wilbur Scoville and it counts how much of a natural chemical called capsaicin is in each type of pepper.

Brain repair 'may be boosted by curry spice'