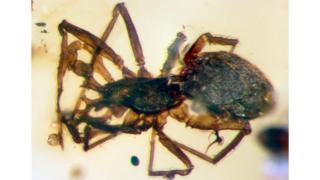 A new species of ancient spider which has horned fangs and an armoured body has been discovered.

Two of the pre-historic spiders were found perfectly preserved in amber in the Hukawng Valley in Burma.

Scientists think that the spiders got trapped in tree resin around 99 million years ago.

The new species has been named Electroblemma bifida, and has been added to the Tetrablemmidae family. 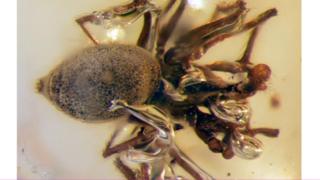 This family of spiders are heavily armoured and like to live in tropical or subtropical regions.

Many of the armoured spiders we have today have evolved in this way to protect themselves from spider-hunting wasps.

Scientists are curious to know if these ancient spiders were also armoured to protect themselves from similar pre-historic enemies.