Everything you need to know about Pokémon Go

What is Pokémon Go?

Nintendo have released their brand new game, Pokémon Go, on mobile devices around the world.

Hundreds of millions of people had already been catching the virtual creatures since it was first launched 20 years ago.

Pokémon Go is a new version of the game, that players can use for the first time on their mobile phones and devices.

Players search the real world using satellite location to find pokémon near them, and use augmented reality to see and capture them.

Is it safe to play?

There are some safety concerns, especially for children. The game is for players who are nine years old and over.

It encourages players to walk around their neighbourhood to catch pokémon, but the makers have warned players to: "Remember to be alert at all times. Stay aware of your surroundings"

Children's charity NSPCC has issued warnings to kids to take care when playing it.

They are asking children to be aware of their surroundings, near roads for example, and to never speak to people they don't know.

This is because Pokémon can appear at random, sometimes in dangerous places like near roads. 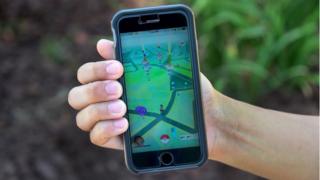 The charity also says that children need to be aware of the dangers of meeting strangers who might also be catching pokémon in the same area as them - and recommend travelling out in groups whilst playing, and telling a parent or guardian where they are going.

They said players should also be aware of people who might use 'lures' to draw people to a particular area which could be dangerous.

The NSPCC also gave warnings about buying things with real money in the game, and about how much information it can access about you through your phone.

If you have any worries about playing the game and would like to know more information about how to stay safe, then you can find out more on the NSPCC's page. 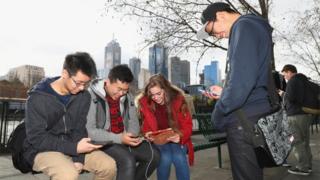 Why are people talking about it?

Pokémon Go has been downloaded millions of times and is top of the app charts in all of the countries in which it has been released, but why is it so popular?

Well, this is the first time Pokémon has been available to play on a mobile device, meaning you don't need a specific console to play it.

This means the game is more easily available for people to play, especially as it is free to download - (although there are in-game options to buy things with real money).

Also, the game's augmented reality feature has proven to be very popular - with players able to see virtual pokémon in a real-life environment, like your garden or living room using a mobile device. 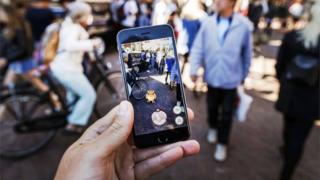 Yes, it can be downloaded through a mobile device's app store for free.

The game developers at Niantic, who make Pokémon Go, have been trying to release it, one country at a time, to test whether or not it can cope with large numbers of people playing it all at once.

So far it is out in Australia, New Zealand, the United States, Germany and now the UK.

Because so many people are using the game, Niantic initially delayed its release date in certain countries, like the UK, until they were happy the problems were fixed. 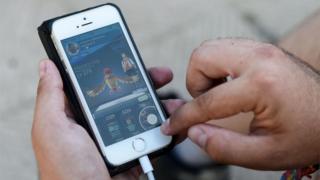 Pokéball - what you use to capture a Pokémon with.

Pokéstop - places of interest which show up as blue icons on the map - where players can collect free items.

Gym - a place where players can battle each others pokémon.

Team - when you reach level 5 you can choose to be part of one of three teams, Yellow, Red or Blue.

Lures - an item in the game which can be used to draw rare pokémon to a particular pokéstop . Anyone can place a lure.

Living with a Poké-mad family