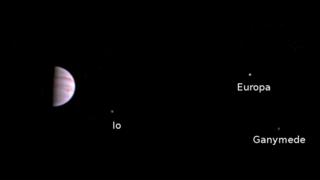 Nasa's Juno probe has sent back it's first picture of Jupiter since it went into orbit around the planet last week.

The picture shows the planet half-lit by the sun and surrounded by three of its moons: lo, Europa and Ganymede.

Juno is currently moving away from Jupiter in a big circle, but will be pulled back into position in August to take better pictures.

As Jupiter has a very radioactive environment, scientists were worried that it might interfere with Juno's equipment and stop it from working.

However, scientists have been checking all the instruments and are happy that they seem to be working well, after flying so close to the planet.

Then there will be a short wait, before the serious studying of Jupiter begins in October.

How to see the planetary trio: Venus, Mars and Jupiter