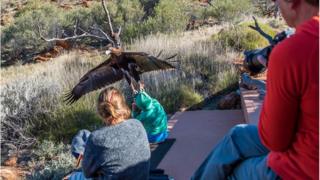 Christine O'Connell / Instagram: 55chris
An eagle attempted to lift a little boy into the air during a bird show at Alice Springs in Australia

A wedge-tailed eagle tried to fly away with a boy at a popular wildlife show in central Australia.

A crowd of shocked spectators watched the bird grab the boy's green hoodie during a show at Alice Springs Desert Park.

Witnesses said the bird tried to pick him up "like a small animal" before park staff moved in to help.

The boy, thought to be between six and eight years old, was left very upset but escaped with no serious injuries. 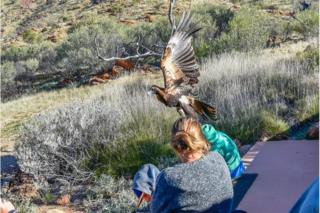 Christine O'Connell / Instagram: 55chris
The attack lasted for seconds before staff from the park stepped in to help 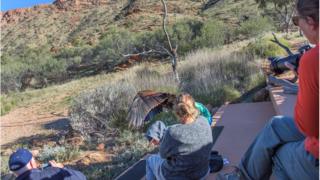 Christine O'Connell / Instagram: 55chris
The boy suffered minor injuries in the attack and was taken for medical treatment

"On Wednesday, 6 July, an incident occurred at the Alice Springs Desert Park where an eagle made contact with an audience member," the park said in a statement.

"A thorough investigation regarding the circumstances behind this incident is under way and the eagle will be removed from the show while this investigation is ongoing."

Eagles vs Drones: The birds who grab drones from the sky