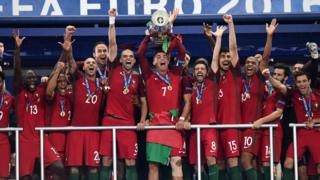 Portuguese captain Cristiano Ronaldo was carried off in tears in the 25th minute at Paris' Stade de France after injuring his knee in a clash with France's Dimitri Payet.

France, the favourites for the title, were unable to make the most of Ronaldo's absence and were left stunned by substitute Eder's superb extra-time strike.

Ronaldo ended the night in tears of joy as he finally lifted the trophy that his country has waited for so long.

"The disappointment is there and it's immense. There are no words to describe this feeling," said France boss Didier Deschamps.

"Clearly we had our chances but we weren't cool-headed enough. My players gave everything tonight but unfortunately we lacked what is essential," he added. 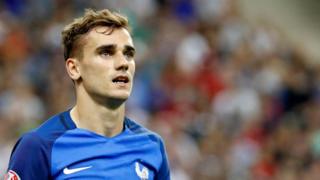 Portugal boss Fernando Santos praised his captain Cristiano Ronaldo: "Today he tried to remain on the pitch. He was very strong in the locker room, he helped all of the boys, that's the definition of teamwork.

"We have a bright future but right now we need to celebrate."

Invasion of the moths

The Stade de France was invaded by moths in the hours before kick-off, making life uncomfortable for fans, players and officials.

Floodlights were left on at the stadium the night before the game, attracting moths who were still there when the teams and supporters arrived.

France coach Deschamps, referee Mark Clattenburg and his team, plus players in the warm-up were swatting them away while staff in the stadium used brushes to attempt to get rid of the insects.

The final in numbers

35: Portugal have won their first European Championship after 35 games at the tournament.

10: They are the 10th different nation to be European champions.

6: Eder is the sixth substitute to score in a European Championship final, along with Oliver Bierhoff, Sylvain Wiltord, David Trezeguet, Juan Mata and Fernando Torres.

3: Portugal become the first team in European Championship history to go to extra time three times in the same tournament.

80: They took until the 80th minute to register a shot on target, the longest wait for a team in a European Championship final.