Ruth was 14 when she left her home country of Eritrea in east Africa.

She didn't like the way she was being treated, so she embarked on a dangerous journey to the UK.

Ruth has been telling Newsround's Hayley her story...

Many of them are migrants or refugees escaping war or devastation in their home countries. They've travelled thousands of miles across deserts, mountains and seas.

When they get to the UK they are often tired and afraid.

They are taken by immigration officers or police to a safe place where they are asked lots of questions.

This is so that the people in charge can understand how old the child is, where they have come from and what they will need to keep them healthy and safe.

If the child is under 17, they are given leave to remain, which means they can stay in the UK and will be looked after until they are old enough to look after themselves.

This often means they are placed with a foster family who look after them as though they are part of their family. They can start going to a local school and they can start to make a life for themselves here in the UK.

Many of the children stay around Kent and Dover in the south of England because that is where they first arrive. In the past year Kent has placed nearly 1,000 children in homes in that area.

I have spoken to 12 children. All of them have come from various countries ranging from Eritrea and Sudan to Syria and Afghanistan.

One of them was Ruth. Like many of the child refugees here, she travelled thousands of miles alone and experienced many difficult things along the way. 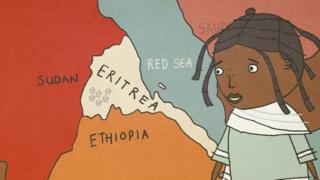 Ruth left Eritrea when she was 14
Living in Eritrea

Ruth told me about her life when she was 14. She lived in the countryside in Eritrea. She told me how she often helped her mum by chopping wood and getting water from the river. At home, Ruth helped her mum on the family farm

But this was no easy task. The river was a three-hour walk away and carrying a heavy load was very tiring for Ruth.

Ruth's dad left home many years ago. He was taken to join the army of Eritrea - many poor people are forced to join up against their will.

Ruth has not seen her dad since and doesn't know where or how he is.

Talking to Ruth, I could tell she is a brave and strong girl and she didn't like the way she was treated in Eritrea. She loved going to school but was told she either had to marry someone she didn't know or join the military.

She told me she was very afraid of both options so she decided to leave Eritrea and search for a better life in another country. 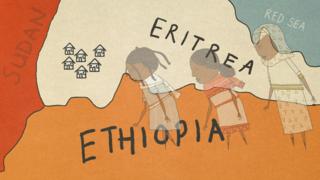 Ruth walked to the border with Sudan

She left her home in the middle of the night. She couldn't tell her family she was leaving because she was afraid they would be hurt if anyone from the military found out.

Also she knew they would be upset. So she left in secret with nothing more than the clothes she was wearing. She met up with two friends and they walked towards the border with Sudan.

Ruth told me that she was very scared. She was scared of getting caught or being put in prison and hurt. 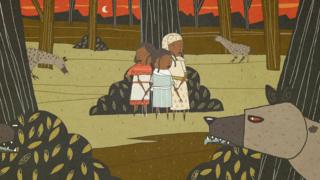 Ruth had to hide from hyenas in the forests of Ethiopia

One of the scariest parts was when she travelled through the forests of Ethiopia. She could hear hyenas and she had to hide behind trees and just hope that they wouldn't find her.

After that, she met many people in camps hidden in the forest. With these people she travelled over the desert to Sudan. It was so hot that many of the people she was walking with died beside her. 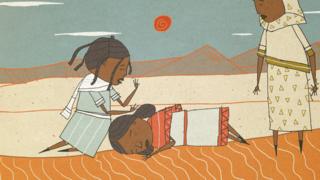 Many people who walked with Ruth in the desert died

Ruth was mostly scared of the Sudanese people. She said they hated her because she was Christian; they would often hurt her and bully her. 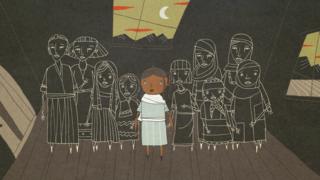 When she arrived in Sudan, Ruth stayed in a small house with lots of people

In Sudan, Ruth was put into a small house with hundreds of other people. She wasn't allowed to speak or to go outside. She was beaten and hurt by the people in charge of this house.

On a lorry to Libya

After a month, Ruth was put in a lorry with about 250 other people and sent to Libya. The lorry was piled with people inside and out. There was no room for her to sleep or sit and she was not allowed out - not even to go to the toilet. 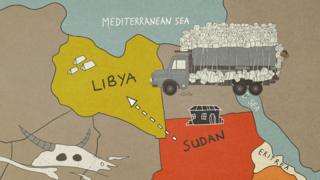 Eventually Ruth managed to board a lorry from Sudan to Libya

She was in the lorry for three weeks and some people died.

Life in a camp

When she got to Libya she was put in a camp. She lost her friends and she said she was very lonely. Without any money, she had little hope of getting out of the camp and every night she cried. 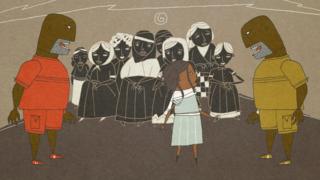 In Libya, Ruth was taken to a camp by people smugglers - she had no money and couldn't leave

In this camp, Ruth got one glass of water and one piece of bread to share with a group of people.

After three months, she finally managed to escape to the coast. She told me how amazed she was to see the sea - it was so big and black with huge fish that she had never seen before.

Ruth got on board a boat. It was only about four metres long but held 500 people. This, she said, was when she was most scared. 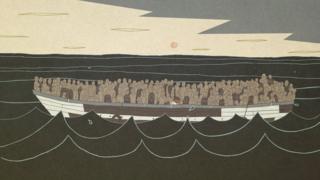 Ruth boarded a boat to Italy with many other people

She thought she would die as she was crushed and had no water on a very long and dangerous journey. Many of the people in the boat did die on that journey.

Luckily, she was eventually rescued by an Italian rescue boat.

But when she got to Italy it was not much better. She was ill and had nowhere to go. She slept on the street in the rain and the cold.

She then managed to get on to a train to France. Here she was taken to a camp where every night she tried to board a lorry to get to the UK. 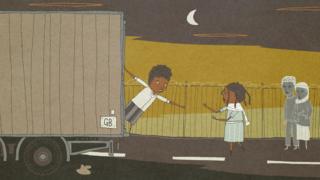 When she reached France, Ruth tried many times to board a lorry heading for England

But most nights she was caught and taken back to the camp. Then one night she managed to get inside a box in a lorry that was headed to England.

When she arrived in England she told me she was nervous. It was raining and a police officer found her and asked her lots of questions. But soon after that, things started to look better and she was placed with a foster family, which is where she lives now. 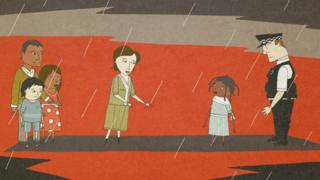 When she finally reached England, Ruth found help and was put with a foster family

Ruth now goes to college and church and has many friends. She told me that she still misses her family but she's glad she isn't in Eritrea. She now loves studying and wants to be a nurse when she's older. 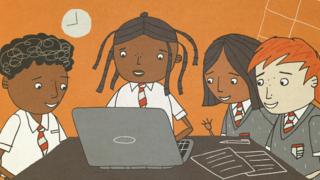 Ruth now goes to college and has many friends, but she still misses her family though

It was very difficult for Ruth to tell me her story. But she's a strong girl and she wants people to know what thousands of kids like her go through every year to get to safety.