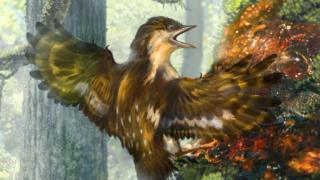 Wings from birds that lived alongside the dinosaurs have been found stuck in amber in Myanmar in Southeast Asia.

The birds got trapped in the sticky sap of a tropical forest 99 million years ago and fossilized to become amber.

Their wings were perfectly preserved and could tells scientists about the way birds evolved. 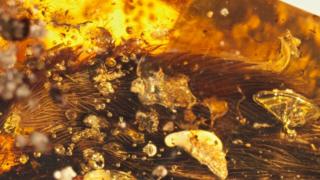 RSM / R C McKellar
The wings were trapped in amber and individual feathers can be seen.

Scientist could see spots and stripes on the wings and saw that they had little claws so the birds could climb trees.

Dr Xing Lida, one of the scientists looking at the wings, explained: "The fact that the tiny birds were clambering about in the trees suggests that they had advanced development, meaning they were ready for action as soon as they hatched."