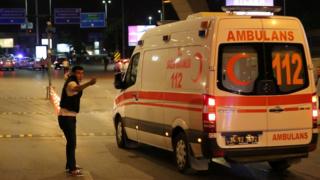 There's been an attack on Istanbul's Ataturk international airport in Turkey.

Gunshots and bomb blasts were heard during the attack, which took place late on Tuesday.

More than 30 people have died and many others have been hurt, officials say.

Turkey's Prime Minister Binali Yildirim said early signs suggested the so-called Islamic State, an extremist Islamic group, was behind the event, but nothing has been confirmed.

The three people who carried out the attack have all died.

The airport has partly reopened and police and security services are working hard to keep people there safe.

Flights in and out of the airport were stopped after the attack, but some flights have now started again.

How is the world responding?

The US called the attack "heinous", which means it was horrible and wrong, saying America remained "steadfast in our support for Turkey".

German Foreign Minister Frank-Walter Steinmeier said: "We grieve for the victims. We stand by Turkey".

Lots of people also showed their support for Turkey on social media - #Pray for Turkey began trending on Twitter after the attack.

There's more advice here if you're upset by the news.