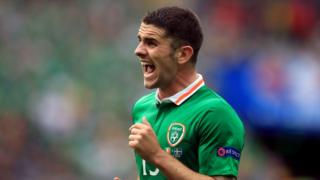 England, Wales and Northern Ireland will be joined by the Republic of Ireland in the Euro 2016 knockout stages.

Robbie Brady scored a late header to give his country a 1-0 victory over Italy.

That meant they qualified for the last 16 as one of the best third-placed sides.

The Republic of Ireland will play the hosts France next - on Sunday afternoon.

Wales and Northern Ireland will play each other on Saturday for a place in the quarter-finals.

England will play Iceland on Monday, after Iceland qualified thanks to a dramatic late winner over Austria.

Iceland are the smallest nation ever to qualify for a major tournament.

Rory McIlroy pulls out of Rio Olympics over Zika fears

Northern Ireland make it through to knockouts