Kids debate whether to stay in the EU or leave 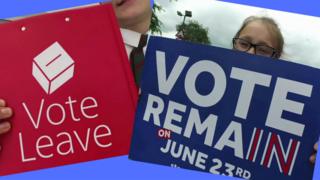 Today is the last day for people to decide if the UK should remain in, or leave, the group of 28 countries called the European Union.

Adults will vote on the issue tomorrow in a nationwide event called a referendum. The outcome of the vote will affect all of us.

Even though kids can't vote in the referendum, lots of you have been telling us what you think about Britain's membership of the EU.

Newsround visited a school where they have been debating whether adults should stay in, or vote to leave.

Naz and Ricky have been on the road across Europe finding out what kids there think of the big debate happening in Britain.

Polish kids on the UK and immigration