Northern Ireland have won their first ever match at a European Championship.

Goals from Gareth McAuley and Niall McGinn gave the team a 2-0 win over Ukraine. 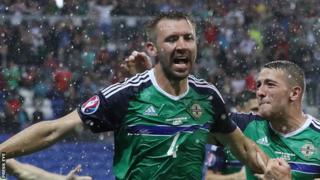 McAuley described the win on Thursday as "massive" and "a very special moment".

The result means Northern Ireland are still in the running to be one of the last 16 in the competition, despite an opening defeat to Poland. 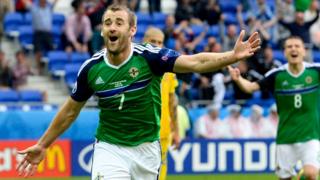 With Ukraine now out of the tournament, Northern Ireland will qualify for the knockout stages if they win against Germany in Paris on Tuesday.

It's the team's first victory at a major tournament finals in 34 years - since beating hosts Spain at the 1982 World Cup.