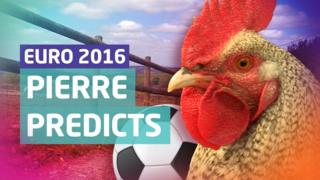 Meet Pierre, Newsround's very own predicting cockerel who will be popping up on CBBC during Euro 2016.

Yes, Pierre will be showing off his, erm, psychic powers by predicting the winner of the home nations' matches.

Whichever food he picks to eat - that is the country that Pierre thinks will be the winner.

Why a cockerel? Well, the cockerel is the national symbol of France - just take a look at the crest on their shirts.

So without further a cock-a-doodle-doo, let's see how well his predicting powers have been working so far...

After some pretty accurate predictions during the group stages we decided to let Pierre rest his feathers, so his friend Michelle the hen has taken up the challenge.

Let's see what her predictions are for the group stages...