There's been an attack in the city of Orlando in Florida, USA.

The shooting happened at a gay nightclub called Pulse in the early hours of Sunday morning.

Forty-nine people have died and 53 have been hurt. Many of the victims were gay people.

Police shot the gunman before he could do any more harm.

It's the worst mass shooting in US history. 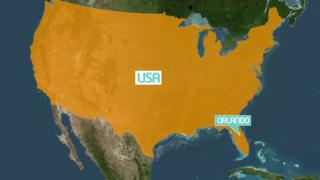 Who was behind the attack?

The attack was carried out by one man.

The so-called Islamic State group has since said it was responsible, but that's not been confirmed.

We don't know exactly why the attack happened, but it could have been because of hatred towards gay people.

Homophobia is hatred or fear towards someone because they're gay.

It can lead to people being bullied or attacked for loving, or being attracted, to someone of the same gender.

In the UK, treating someone differently because of this is against the law.

But in some other countries in the world it is illegal to be gay and you can be punished.

Islamic State has been known to kill people because they're gay. 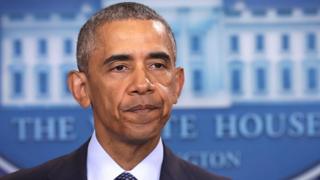 What has President Obama said?

"This was an act of terror and an act of hate," US President Barack Obama said.

"And as Americans, we are united in grief, outrage and resolve to defend our people."

Police are investigating what happened and if the attack was linked to extremist groups.

President Obama has repeatedly called for tighter controls over who can own a gun in the US.

In America, most adults can own a gun if they want to - it's a right set out in US law.

But in the UK, it's much more difficult to have a gun.

People have to get a certificate from the police and show why they need it - for example, because of their job or hobby, such as hunting.

How are people helping Orlando?

People have been queuing up to donate blood to help the victims that are still in hospital.

There have been marches in cities across America, where people have shown their support. 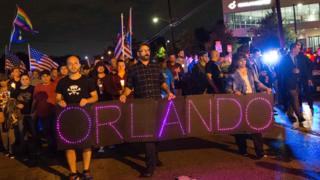 Vigils are also being held around the world.

Mr Obama has asked for flags on government buildings to be flown at half mast until Thursday as a sign of national mourning.