Jenny and Leah are at the 2016 European Championship where they're sending us all the latest news and backstage info from behind the scenes.

Jenny has sent us an update from Lille in France, on the latest fan violence there ahead of the England v Wales match.

Leah is in the Stade de Lyon checking out all the preparations before the Northern Ireland v Ukraine match.

Take a look at her full behind the scenes report here!

In Lille, Jenny says the riot police are out to move on fans causing trouble and chanting.

Leah has made it to Lyon in France, in time for Northern Ireland's game against Ukraine.

She gave us a sneak peek into the Stade de Lyon, and even touched the pitch. It's okay Leah, we won't tell anyone...

Jenny has arrived in Lille in France where the big England v Wales match will take place tomorrow.

Around 100,000 fans will flood the main square there to watch the game, and there are already lots of police in place, in case there is any more fighting between fans..

Jenny is on the train to Lille for England v Wales on Thursday, busy updating her Euro 2016 wall chart. 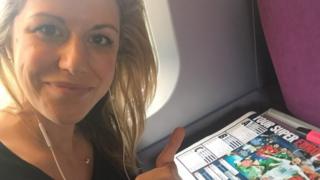 Leah has arrived in Nice for the Poland v Northern Ireland game and everyone is in high spirits.

Wales managed to beat Slovakia 2 - 1 in their first match in the Euros!

Jenny is outside the Stade de Bordeaux and sent us this post-match update.

Jenny is outside the Stade de Bordeaux where Wales will be going head-to-head with Slovakia.

She's been checking out the thousands of people who queuing up to watch the big game.

Our very own Leah has managed to sneak onto the Stade Velodrome pitch in France for her latest Vlog!

England will be playing their first match against Russia in the stadium later today.

Jenny is at the Stade de Bordeaux in France and is getting ready for Wales' first big match against Slovakia today.

This is the first time both teams have made it into the Euros, so it should be an interesting match!

Leah is on her way to the Stade Velodrome in France, ahead of England's match against Russia.

This is England's first match in the Euros, and a win could set them on a good course for the rest of the tournament, but can they do it?

The day has finally arrived! Euro 2016 is set to begin and Jenny is in Bordeaux, at the largest fan zone in France, where thousands of people are expected to watch the opening match between France and Romania on Friday evening.

Leah is in Marseilles at the Stade Vélodrome where the lawnmowers are out and last minute preparations are underway. 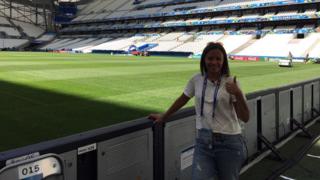 It's a thumbs up from Leah in a sunny Stade Vélodrome

Jenny is at the Stade de Bordeaux.

Leah is at the Stade Vélodrome in Marseille.