Emma Willis to host The Voice on ITV 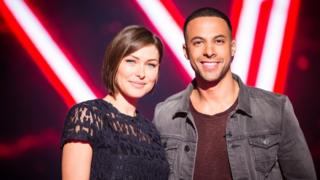 Emma Willis and Marvin Humes have hosted The Voice since 2014, but Humes will not join Willis on the ITV show in 2017.

Emma Willis is to continue hosting singing talent show The Voice UK when it moves to ITV next year.

Emma has fronted three series of the programme since 2014, said she was "absolutely delighted to be back".

She will host the show on her own, as BBC co-presenter Marvin Humes will not return.

Last November ITV confirmed it would start to show The Voice.

Humes had co-hosted the singing competition with Willis since 2014 and said he would, "miss working with Emma and the team".

"I've loved every minute of working on The Voice for the past three series," he told the BBC.

"It's one of the best shows on TV and I'll definitely be tuning in to see the new series. I wish the new team the best of luck and look forward to working more with ITV in the near future."

ITV has yet to announce who the celebrity coaches will be on the new series, due to broadcast in 2017.

The first things Kevin Simm did after winning The Voice