Tropical fish might be smarter than you think new. New research shows they can recognise different human faces.

Scientists from the UK and Australia have shared a video showing specially-trained 'archerfish' who can pick out the same face in a lab experiment. Check it out. 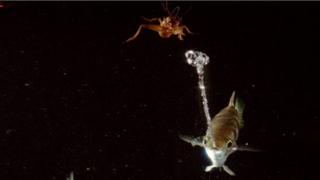 Archerfish are famous for their ability to spit jets of water up into the air, to hit food above them.

So scientists used that skill in their experiment: they displayed different human faces above the fish tank, and taught the fish to spit at one of them, but not others. 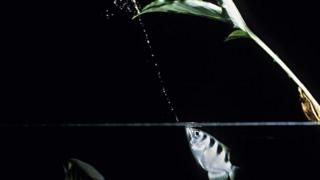 How do they do it?

Telling human faces apart might be more difficult that you think - we look mostly the same, with two eyes, a nose, and a mouth.

That means that you have to be able to notice the much smaller, less obvious differences, like how far apart those facial features are.

It's a big challenge for fish, because they have much smaller and simpler brains than humans.

The lab statistics show that they were able to pick the right human face out of 44 others more than 80% of the time.

Dogs can tell human emotions from your face

Farting fish could be cause for ocean 'buzzing' noises