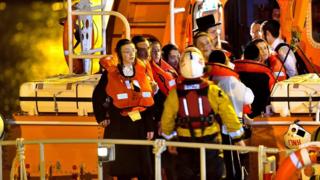 More than 30 pupils who became trapped by rising coastal tides were rescued after using their mobile phone light to attract attention.

The 34 young people and two adults had got lost on the Kent coast in a dangerous area where rocks can fall from the cliffs.

The group were caught out by rising sea waters, a coastguard spokeswoman said.

An air and sea search began on Monday night after the school group from London alerted Kent Police. 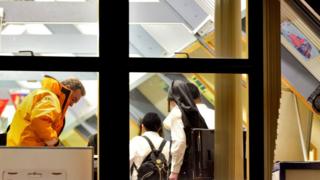 A rescue helicopter was involved in the operation, along with three lifeboats - and the Langdon Coastguard Rescue Team.

The Maritime and Coastguard Agency said the group were told to use light from their phones so that rescuers could see them in the dark.

After being spotted using night-vision cameras, 31 members of the group were taken ashore and the remaining five were airlifted to the Dover Coastguard station. 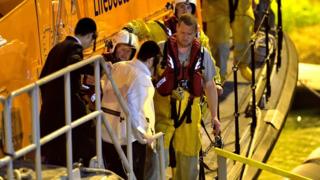 Stuart Brock Photography
Five of the group were airlifted to safety, but most were taken ashore by lifeboat

"All 36 people were recovered to safety by lifeboat and helicopter."

The Port of Dover later tweeted that the group's rescue was "a lesson to us all to be careful around water and check tidal information".

How to train a search and rescue dog