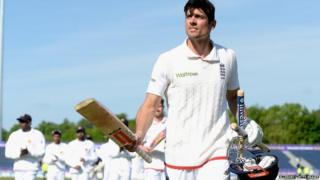 He reached the milestone on Sunday during the England match against Sri Lanka.

Aged 31, five months and five days, he saluted the England balcony after reaching his landmark moment.

"It's a very special moment for me," Cook said. "You forget about all the hard times you have as a cricketer."

To top off the day, England then cruised to a comfortable win, which meant the team have now won the series against Sri Lanka.