Guide: The Battle of Jutland

The 31st of May 2016 marks 100 years since Britain and Germany fought each other in the Battle of Jutland.

It was the biggest fight to take place on sea during World War One and happened in the North Sea, just off the coast of Denmark.

British ships had set sail to stop the German fleet and there was an expectation that Britain would win the battle.

Britain's navy was superior to Germany's - they had a bigger fleet and more firepower. But the battle didn't unfold as simply as many thought it would do. 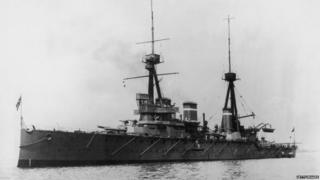 Getty Images
This is British Navy battlecruiser HMS Invincible. It was the first battlecruiser ever built. She was launched in 1907 and sunk at the Battle of Jutland.

What was at stake for Britain and Germany?

Up to 1916, the war had been fought on land but Germany was desperate to break the blockade on its ports.

If they won, they could stop Britain being able to transport troops, supplies and guns to Europe.

Britain wanted to keep control of the North Sea and stop food and raw materials getting to Germany.

How many men and ships were involved?

The German High Seas Fleet was under the command of the Admiral Reinhard Scheer.

In charge of the British fleet that day was Admiral Sir John Jellicoe.

It brought together the two most powerful naval forces of the time and it became the largest sea battle in naval warfare history in terms of the numbers of battleships involved. 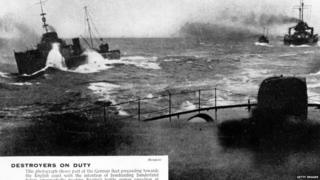 Getty Images
German fleet ships heading towards England to hit Sunderland - but they were blocked by British ships.

What happened during the battle?

In the beginning of the battle, Britain thought they had the upper hand as they were intercepting German intelligence. But some of the information wasn't correct and the German ships were not at port, but already out at sea. This meant British ships were surprised when they came upon the German navy ships at that particular moment.

Britain launched an attack on German ships, who returned fire. Britain's HMS Indefatigable and Queen Mary were hit and the two ships exploded. More than 2000 men on the ships died. It was later discovered that cordite, a type of explosive, was being stored incorrectly and caused the ships to explode.

The British ships then retreated back towards the rest of the British fleet, leading the Germans into a trap.

Admiral Jellicoe then formed his warships into a six-mile semi-circle and hit the German ships. The Germans were forced to back away but turned again to launch torpedoes back at the British. 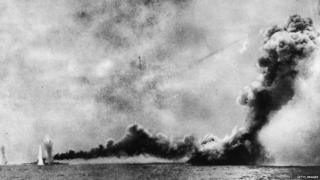 Getty Images
HMS Lion, left, is shelled and HMS Queen Mary, right, is blown up by German shells during the Battle of Jutland.

By this point, Jellicoe had lost three battlecruiser ships and there were more ships hit later on that night. Jellicoe then decided not to risk any more ships and did not return to battle with the German fleet.

How long did the battle last?

How many people died?

Who won the battle?

The Germans claimed victory, as they lost fewer ships and men. The British press reported this and Admiral Jellicoe was criticised for being overly cautious in the battle and was later sacked. But within days, attitudes changes and Jutland was seen by some people as a victory for the British. This was because Germany never again tried to challenge the British Grand Fleet and stayed in their bases for the rest of the war.

Who really won the Battle of Jutland is a topic that is still debated now, 100 years on.

Read Newsround's guide to find out what happened in World War One.

What was life in the trenches like during World War One?

The role of animals during World War One