US President Barack Obama has visited Hiroshima in Japan 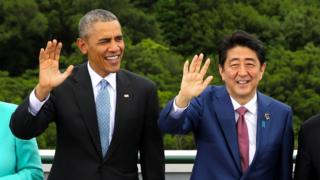 Barack Obama is the first serving American President to visit Hiroshima in Japan. It is the city which was destroyed by a US atomic bomb in 1945.

The bombing - and a second one on the Japanese city of Nagasaki three days later - is credited with bringing to an end World War Two but it claimed the lives of hundreds of thousands of people.

Survivors of the attack were at a ceremony with President Obama where he honoured all those who lost their lives in World War Two.

An American B-29 bomber called the Enola Gay dropped the nuclear bomb, exploding some 600 metres above the city on 6 August 1945.

On that day alone, at least 70,000 people are believed to have been killed.