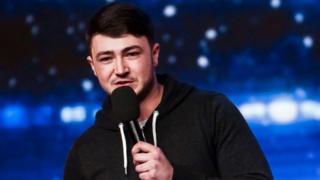 Singer Wayne Woodward and sword swallower Alex Magala are the latest two acts to make the Britain's Got Talent final.

The judges then had to decide between Alex and dancers Shannon and Peter. David, Alesha and Simon agreed Alex should go through.

When asked what he's going to do next, Alex laughed: "It's going to be a surprise even for me!"

BGT bosses decided to pre-record his performance because they felt it was too dangerous to do live.

Alex and Wayne join choir 100 Voices of Gospel and mother-and-son singing duo Mel and Jamie, who went through in Sunday night's semi-final.

BGT: 100 Voices of Gospel and Mel and Jamie through to final